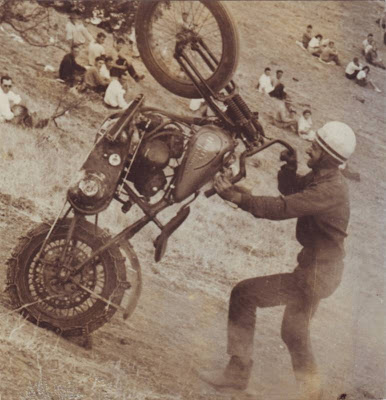 "Dramatic original photograph of an early San Francisco hill climb. Rider Charlie Artal jumps off his Harley Davidson motorcycle in an unsuccessful bid to reach the top of the hill. His post World War II Harley Davidson looks like it might be the 45 cubic inch flathead WR racing motorcycle." Thanks Epinut for the ID as the bike is a VL contrary to what the caption says!
Posted by Stretch at 1:50 AM

That bike would be a VL, not sure what year though...

Can you post the full picture with the caption?

Can you post the full picture with caption? I have what I believe to be a original photo and it's from Hospital Hill in Modesto 1945.Thank you.