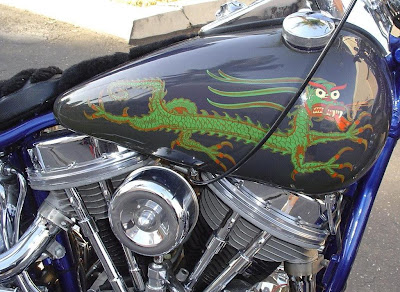 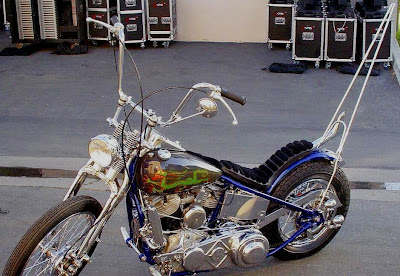 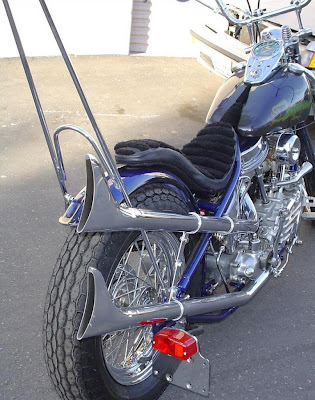 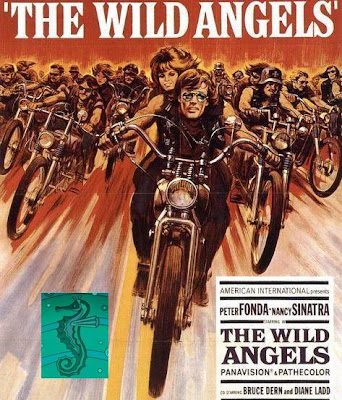 Correct me if I'm wrong as this Ebay bike is an "exact" replica of Peter Fonda's Panhead in Wild Angels but I don't remember ever seeing a dragon on the tank? I thought the bike was all jet black and chromed out? Anyhow here's a little blurb about the cycle from the auction and a link (there's a rad picture of a wax Gov. Arnold riding the Pan as well!) - http://cgi.ebay.com/ebaymotors/ws/eBayISAPI.dll?ViewItem&item=280319377911&category=6707&viewitem=):
"1950 FL Harley-Davidson Panhead Movieland Wild Angels Dragon Custom Bike Chopper-60's Springer, Pan-head motorcycle. Originally used for Movieland's Wax Museum Nancy Sinatra set. This motorcycle is an exact duplicate of the 'Dragon' motorcycle used in the cult biker film 'Wild Angels'. Wild Angels,(1966) starring Peter Fonda and Nancy Sinatra, was a landmark outlaw motorcycle culture film, and customs are featured thoughout the film, but none more so than the 'Dragon' bike, which Mr. Fonda can be seen riding throughout the picture." 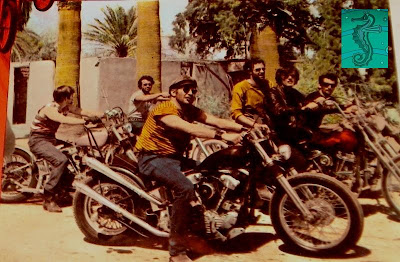 I stand corrected now as I do see the dragon on the tank in this Lobby Card above and in the Movie Still below! 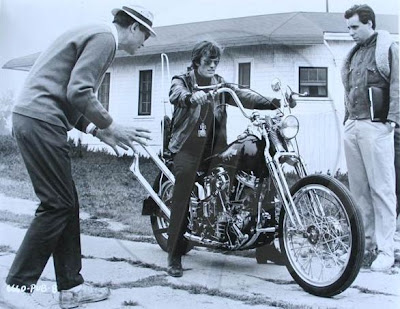 Exact Duplicate My Ass! Fonda's bike was #1 painted midnite blue. #2 ran a Xa springer. #3 seat ran 3/4 up the sissy rail. #4 the
dragon looked more like an alligator than a cartoon japanese
dragon. #5 a more "correct copy"
was displayed at Movieland Cars of
the Stars, were Dutch & Roth worked
#6 The original was allegedly stolen of the set when the movie wrapped. And my list could go on & on.

Follow this link to see a photo I took of the original that is at the Motorcycle History Meuseum in Anamosa, IA.